TLDR: Click here to play our 48-hour jam game in your browser!

This year, we decided to participate in our first ever GMTK game jam. We've done one other game jam almost exactly a year ago, but this one was a little different: instead of two weeks, we had just two days to create a game from scratch. We decided to blow off a little steam from working on Navi and give it our best shot.

On June 11th at 2pm, the theme was released: "Joined Together". We had until 2pm on June 13th to ideate, create, and upload our finished build. We had many initial thoughts: could we do some sort of database game using JOINs? What about a game where your weapon is tethered to you, and you just have to swing it wildly around you based on your characters movements? Or maybe a knitting game where you join together yarn?

We then joked about doing a hockey game where you and your teammates are tied together with a rope and have to play hockey. Actually, wait, that sounds fun! What about if we just have 2 players - and you control both at the same time? Why are they tied together? Is it because married? Of course it is! And thus, MARRIAGE HOCKEY was born. 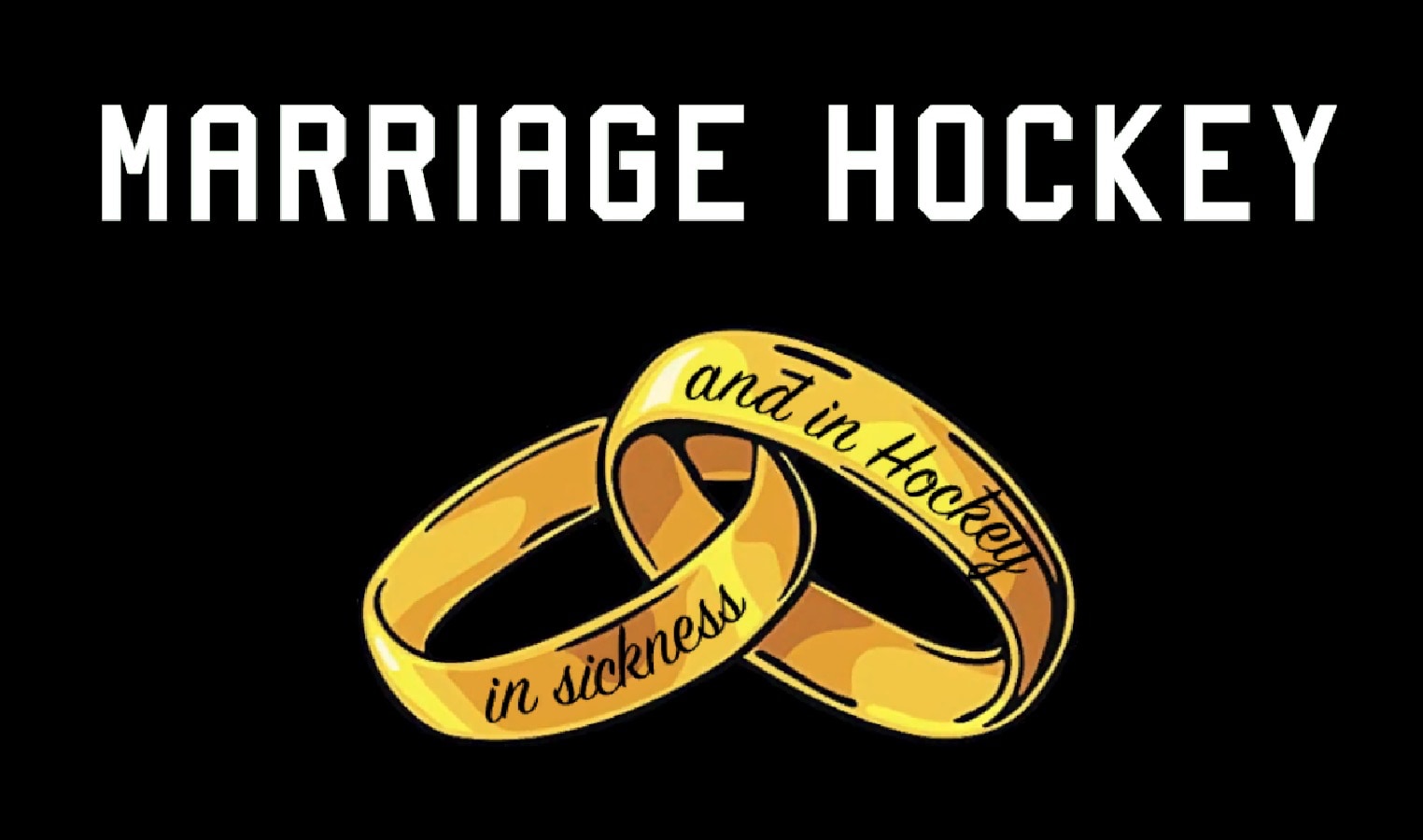 Here's how it works:

You and your spouse just got married. Congratulations! However, by your family's traditions, you must play a game of Marriage Hockey in order to predict the future of your relationship. Are you doomed, or will you have the best marriage ever? Only the score will tell.

Use WASD to control the groom and the arrow keys to control the bride. Use the rope that connects you to hit the puck and score goals. Each goal is a point toward the future of your relationship. We designed this to be played single player, but can easily accommodate a partner playing one of the controls.

Occasionally, family and friends will throw wedding presents onto the ice to help with your score. 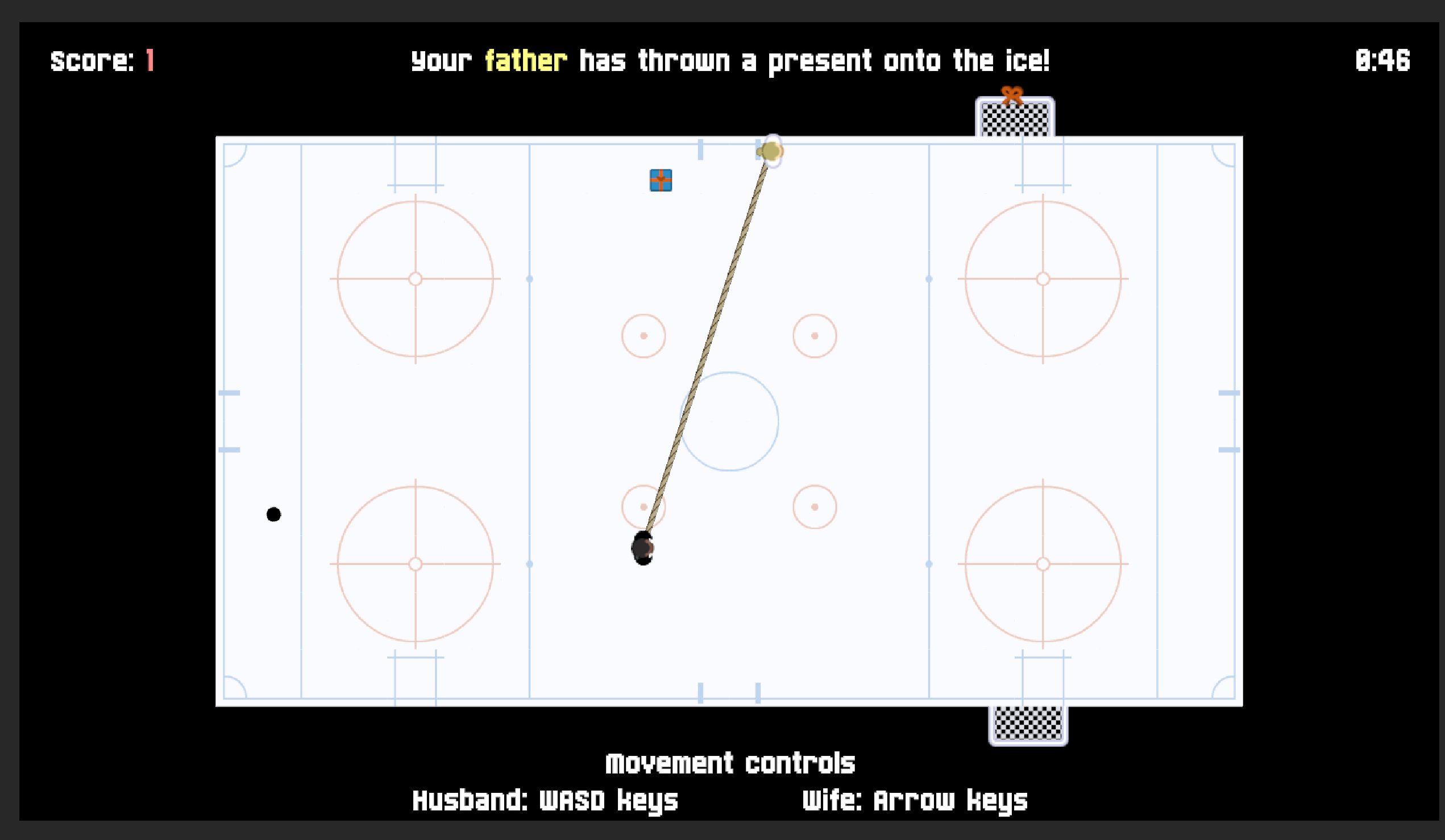 And of course, we had to add some lore:

Somewhere on this earth, tucked far, far away
Our ancient tradition takes place to this day

Jake found this game jam timeline breakdown which outlines how you should roughly spend your time during a 48 hour game jam. It espouses the "4:44" rule, which says that the first 4 hours should be spent blocking out the features of your game, and the remaining 44 hours should be spent on polish and bug-fixing.

We split up the tasks right away. Jake started by adding our players and tying them to their controls, while Jessica added tilemaps, colliders, sprites, and auxiliary scenes. In retrospect, we definitely didn't need tilemaps, but we didn't know that at the time.

Next, we started adding rules. First, we needed a puck to fly around with some physics. Next, we needed a net with a collider to hit into. Once they made the point, we felt like the game was kind of boring if the net was static. So, we started randomizing its location around the perimeter of the rink to make it more interesting. Then, we added a timer to make it more interesting: one minute to make as many goals as you can.

We were initially planning on adding moving obstacles to make the game harder, but after playing around with it, we realized we actually need to make the it easier. Game designers usually start out wanting to make a substantive game with legitimate difficulty, but it turns out that when you're making a small weird game, leaning towards easier is safer and more accessible to people. If the game is too difficult, people will pass on the game right away.

To make it easier, we added the idea of the player's friends and family throwing gifts onto the ice. Each gift temporarily added an extra puck or net to the rink, which disappeared once they were used to score a goal. Once the game was released, a streamer suggested we add an "extra time on the clock" gift, which was brilliant, but unfortunately the jam had already ended.

At this point, the game was feeling good, but needed something to make it feel more polished. It was time to add... that juice.

Jessica added some sound effects, which made a huge difference. Jake threw in a bit of screen shake on every puck collision (and a bit more on every goal scored). We added a motion trail to the puck and some particle effects sprinkled about. Does the net need to explode in a ball of fire when you score a goal? Of course it does. Wiggly goal letters and nicer fonts made it in. All these little things made a huge difference in quality, even though our assets weren't the most polished.

We decided to upload our first draft build about 24 hours into the jam. We'd heard itch.io sometimes crashes near the end of a jam when everyone is trying to upload their game, so we figured an early upload would give us some insurance, and we'd still be able to update it closer to the deadline.

We ended up with some time to spare before the deadline, so Jake took the time to create a web build with our last few minutes. This had a large impact to the number of players we got, because it was so much more accessible. After the deadline, we saw lots of streamers who were only playing web builds, because they understandably didn't want to run random executables on their machines. In future jams, we'll probably be aiming to make web builds from the start for this reason.

In the end, out of 5,798 entries in the jam, we placed 670th! We didn't make the top 100, but making the top 12% felt really exciting to us as novice game jammers. Even participating or finishing a game at all is a huge accomplishment, so congratulations to us all!

In the future, we think we'd spend more time making our own graphics, because that seemed to hurt us more than we expected in the ranks. We also spent a lot of time promoting the game to streamers, but after watching how the game jam rankings actually played out, we trust itch.io's rankings queue algorithm to fairly distribute rankings without the need for external promotion. So, in the future, we'd promote the game a little to see it streamed, but not to make sure it got rankings.

Now, refreshed from making a bonkers sports game, we're back to working on Navi. Thanks for reading, talk to you soon!